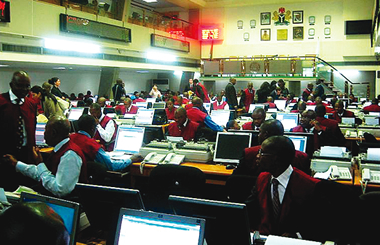 At the first public engagement with the media last Thursday, the management of the Nigeria Stock Exchange led by Oscar Onyema gave insights on how the stock faired last year, reports Bukola Afolabi

FRESH facts have emerged as to why the nation’s stock market failed to achieve optimum growth potential in the outgoing year.

Early last year the managers of the Nigeria stock Exchange had projected that at the end of the year 2012, a record 20 companies would be listed at the Exchange.

An upbeat Oscar Onyema, Chief Executive Officer of the NSE in a manner somewhat reassuring had told a packed audience at the time that the prospective companies would be substantial in terms of equity and value.

But one year down the line, the blessed assurance has turned to forlorn hope.

The NSE boss said that much at a news conference last Thursday where he lamented the parlous state of the market. According to him, the market for IPOs and new equity listings was flat – no IPOs and there were two new listings on the main board while a total of four companies were delisted, including FinBank Plc, following its acquisition by FCMB Plc, and Ablast Products Plc, Udeofson Garment Factory Plc and Hallmark Paper Products Plc, as a result of noncompliance with the Exchanges’ post-listing standards.

Three banks were also delisted and relisted in compliance with the holding company structure mandate by the Central Bank of Nigeria (CBN), following the repeal of the Universal Banking Guidelines, in a move to restore regulatory and corporate governance soundness in the Nigerian Financial system.

He said 20 companies indicated there interest at the end of year 2011 that they are coming to the stock market to be listed only 2 companies show up.

According to Onyema besides unfavorable effects of the global financial crisis which lingered throughout the year, the country suffered fiscal challenges, double-digit inflation (12.3% in November), high lending rates (MPR of 12% in November), and a decline in GDP contributions from key sectors such as oil and gas (13.42% in Q3, down from 15.80% in Q1), to record GDP growth of 6.48% in the third quarter.

The implementation of the nation’s policy on fuel subsidy last January also stalled economic activities at the beginning of the first quarter, the result of which was felt in the capital market through the first half of 2012.

There was more excitement in the second half of the year with steady growth across most sectors, and the inclusion of selected Nigerian government bonds in the JP Morgan Government Bond Index Emerging Markets (GBI-EM). Consequently, international institutional investors flocked to the Nigerian bond market, while local institutional investors’ appetite for equities was reawakened.

Notwithstanding certain prevalent, national and market-specific challenges, the NSE’s major index closed the year with its strongest performance since 2008, while other indices topped their performance pre-global financial meltdown.

Onyema has said entrance of local companies into the capital market was expected to improve the Exchange.

The NSE boss, said the capital market which was dominated in the past by forging companies has witnessed increased in the presence of local companies being listed on the stock Exchange.

The NSE boss also recalled that in March 2012, offered issuers greater flexibility to raise capital from the market, just as the Exchange amended its listing rules to include quantitative measurements for profit, market capitalization, price and public float, among others.

To increase the level of market compliance, the NSE launched the Broker TraX tool at the start of the year. The tool provides transparency of broker and brokerage firm compliance with the rules of the market.

This was followed by the release of the Market Quality Report (X-Qual) in November 2012, which offers brokers and analytical investors insight into how to derive best execution of orders in the market, and the quality of execution that can be expected.

To enhance the investor experience, the NSE launched its new Web site in January 2012 with a real-time feed to a ticker, and rolled out X-Net, a virtual private network (VPN), to enhance brokers connectivity (20x faster than the previous offering) to the Exchange’s trading systems.

The Exchange also commenced development and testing of its new trading platform, X-Gen, which will go live in 2013.

NSE boss said that they are seeking Federal Government support to hit $1trillion capitalization mark in 2016.

According to him, it is not impossible for the NSE, which currently has a market capitalization of N10tn, to reach $1tn (N150tn) mark by 2016, however, the support of the FG is needed in many ways to achieve this.

He said “When we gave the target of 1trn market capitalization in five years. It was an aspiration target, we were aware that a lot of things had to align to be able to achieve this, for instance, we depended on the regulation of the power sector and the quick passage of the petroleum industry Bill.

“And so, we need the support of the government to ensure that the 16 companies that would come out of the power privatization process would be listed on the NSE. The same goes for the telecoms companies we need government assist in getting them to list their companies also.”

The NSE helmsman is also optimistic that this year would see gains by global investors hoping to emerge in the frontier markets.

Despite an anticipated dip from 5.0% to 4.8% by the OECD, economies in Africa are forecasted to maintain a positive growth trajectory, underpinned by factors such as strong performance of oil-exporting countries, continued fiscal spending on infrastructures projects, and expanding economic ties with Asian economies, Onyema stressed.

The outlook for the Nigerian economy also remains promising with a projected growth of 7.67% by the National Bureau of Statistics (NBS).

While the impact of government policy on fuel subsidy and other macro-economic shocks were felt last year, the CBN’s restrictive monetary policies, expectations for stable crude oil prices, and the FGN’s continued effort at fiscal conservatism should create an environment for single-digit inflation rates and MPR reduction by the CBN.

Although existing challenges such as the security situation in the country are not expected to disappear, on-going governments initiatives to increase power generation, financial inclusion, and transformation of the agriculture sector are expected to carry over into the new year.

The Nigerian Capital Market will continue to face challenges around liquidity and depth in 2013, however, there is a concerted effort to drive improvements in market participant experience.

The CBN’s efforts to achieve single-digit inflation and a lower MPR should have a positive impact on the equities market. As investor confidence measures implemented by the NSE mature, we expect that a growth trend similar to that experienced in Q4 2012 will extend into 2013.

On the fixed income side, we anticipate the relative attractiveness of FGN bonds will continue for local and global investors, as a result of record-high yields. With the upcoming inclusion of Nigerian FGN bonds in the Barclay’s Emerging Market Local Currency Bond Index, this should keep the nation’s bonds in the international spotlight.

Furthermore, foreign issuers such as the International Finance Corporation (IFC) are expected to enter the Nigerian bond market this year.

Other contributing factors to optimism about the capital market include early passage of the national budget, which creates an impression that fiscal policy is being prioritized.

The pronouncement to begin investing proceeds of the Sovereign Wealth Fund (SWF) in March 2013.

Besides, Onyema is persuaded that the elimination of VAT and stamp duties, which should take effect in 2013, freeing up funds for capital market investment just as continued product innovation by the Exchange, such as the commencement of secondary bond market trading, and the introduction of new indices and ETFs.

Notwithstanding the hopeful promises, many analysts are of the view that a lot is required to turn the tide for the market.