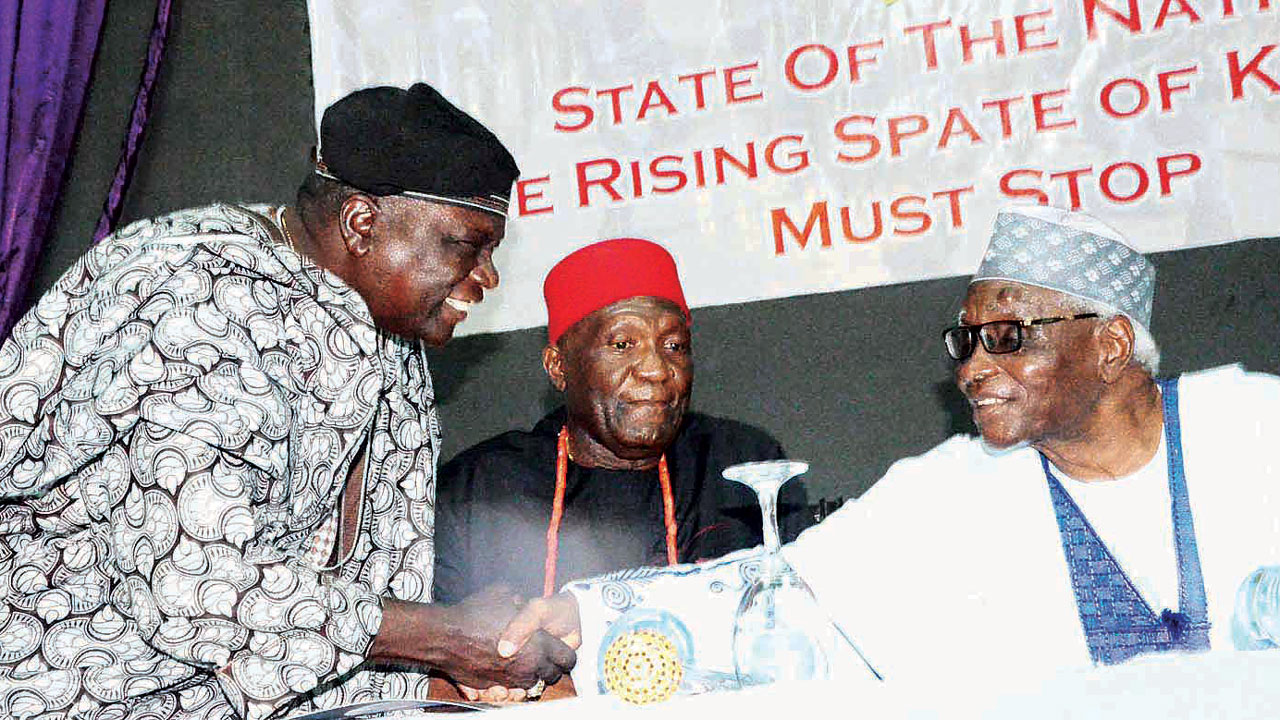 A summit of national leaders and elders convened by the Northern Elders Forum (NEF), Afenifere, Ohanaeze Ndigbo and Pan Niger Delta Forum (PANDEF) ended in Abuja yesterday with a resolution to continue to push for the emergence of a more visionary and dynamic government to redeem Nigerians from the shackles of insecurity, poverty and misgovernance.

Participants observed that “the country now witnesses unprecedented incompetence and enthronement of mediocrity in dealing with the horrendous spate of killings and general insecurity across the nation.

“In the eyes of many affected communities, there appears to be palpable government complicity in the killings going on around the country.”According to a statement issued at the end of the meeting, “the summit resolved to insist on the emergence of a visionary and dynamic leadership who will effectively deal with our security and economic challenges, and ensure good governance in the country.”

In the statement signed by Chief Edwin Clark (PANDEF), Prof. Abdullahi (NEF), Ayo Adebanjo (Afenifere) and John Nnia Nwodo (Ohanaeze Ndigbo), the leaders declared “it is imperative to revamp the security architecture of Nigeria and also ensure the removal of marauding killers from the communities they have occupied and return the same to their rightful owners who now live in Internally Displaced Peoples (IDP) camps.”

The summit noted with dismay the mismanagement of the economy which was already approaching recession by 2015.“Today, the economy is characterized by significant loss of output, massive youth unemployment, a rising level of poverty, instability and irregular migration of skilled and unskilled labour.

“In fact, according to the World Bank, the unemployment rate in Nigeria has increased despite its purported exit from recession in 2017. This is a national embarrassment and a disgrace to a country that is endowed with abundant resources.

“According to World Data Laboratory, Nigeria overtook India this year as the poverty capital of the world. In addition, Nigeria’s ranking on the human development index was one of the lowest in the World, standing at 152 out of 188 countries surveyed in 2017,” the leaders lamented.On graft, the summit “noted with great concern that despite the present administration’s war against corruption, the highly acknowledged global monitor of corruption perception, Transparency Intentional, has adjudged Nigeria to be more corrupt today than it was in 2015. It is disturbing that Nigeria has in the last 3 years degenerated from the 136th to the 148th place out of 180 countries surveyed for corruption perception in 2018.

“The kleptocratic nature of governance and appointments to public offices and institutions, as well as the carefree attitude of government to citizens’ discontent, have resulted in breading deep divisions and inter-communal distrust. This is a development that is of grave concern to all Nigerian patriots.”

The elders observed “with alarm the flagrant abuse of and disrespect for the rule of law as well as the systematic violation of our electoral processes. These infractions are steadily eroding public confidence in our hard-earned democracy.”

In a speech, Obasanjo, whose letter to the summit was read by a former Osun State governor, Olagunsoye Oyinlola, lamented the harm that “the present administration of President Muhammadu Buhari, by his action and inaction, has done and is doing to our commonwealth and our common heritage.”He said: “Nigeria, in recent times, has not been so divided along religious and regional lines as it is today with inexcusable killings and devastating poverty and with government’s wringing hands and apparently incompetent to stem the tide except giving one unrighteous and unacceptable justification after the order.

“The obvious indication is that the government is seemingly confused and has got to the end of its tether and the nation is being left divisively and perilously to drift.”

Dr. Hakeem Baba Ahmed, a former permanent secretary in the Federal Ministry of Works and current Chief of Staff to Senate President Bukola Saraki, noted in a keynote address that: “Security, law and order agencies have not been held accountable for the disastrous collapse of the nation’s security infrastructure.“The nation is potentially exposed to more violence as the police failed in their basic responsibilities, the military is stretched beyond its capacities and the challenges of the forthcoming elections will divert resources and attention from basic security responsibilities.”

He called on President Muhammadu Buhari to show firmer and more decisive leadership in dealing with the alarming scale of killings and other violent crimes.“The President’s claims that certain interests and persons are involved in fueling the killings for political reasons must be taken seriously. These persons and interests must be exposed and brought to book. They must not remain as mere excuse for failure to secure citizens and the nation. Heads of security, law and order institutions must be held accountable for failures and lapses.”

Ahmed also said that the President should critically assess the levels of competence and commitment of agencies responsible for securing Nigerians and take necessary steps to ensure that only the best and most committed from them are entrusted with responsibility.Abdullahi declared that things had degenerated so much in the country that the government had been so disconnected from the people it governs.

The source told The Guardian in Minna that Jonathan arrived at the home of Babangida a few minutes after 10 am.“He was in the house in the company of a gubernatorial aspirant of Peoples Democratic Party (PDP) in Niger State, Alhaji Hannafi Muazu Sudan, and they left together.” The meeting may not be unconnected with how to wrest power from the ruling All Progressives Congress (APC) in 2019.Jonathan was said to have headed back to Abuja at about 1:00 p.m.