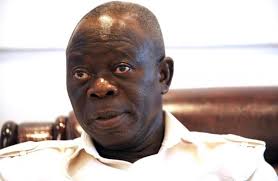 The Director-General of the Progressive Governors Forum, Salihu Lukman, has blamed National Chairman of the All Progressives Congress (APC) Comrade Adams Oshiomhole, for the diminishing fortunes of the party.

In a letter entitled “APC: Appeal for Reconciliation,” dated August 6, 2019 addressed to Oshiomhole, Lukman said: “As a loyal party member, I have difficulty reconciling the absence of meetings of superior organs given all the challenges the party is going through, warranting the suspension of three serving governors (two of them now Senators) and two members of NWC.”

Assessing Oshiomhole’s leadership, Lukman declared: “My distant observation is that there is hardly any difference between your approach in managing the party and the way Chief Oyegun had managed it during his tenure.

“Instead, things have really got worse and painfully, it would appear, you are in denial of this reality.”

He noted: “It would appear that the leadership problems facing the party are getting deeper and in the circumstances the business of building the party will be sacrificed.”

He also lamented the loss of governorship contests in Zamfara, Oyo, Imo, Bauchi and Adamawa owing to internal wrangling, warning similar scenarios might play out in Kogi, Ondo and Edo.

Lukman said: “It is a painful reality that we have found ourselves in situation of near stalemate in many states under your leadership.

“Embarrassingly, our leaders, including your very self, appear to be stubbornly inconsiderate of other options of resolving these challenges.

“If the electoral loss of Oyo, Imo, Zamfara, Adamawa and Bauchi are not a wakeup call to the dangers that lie ahead, what could have been?

“Is it that our leaders are indifferent to the possible return of People’s Democratic Party (PDP)?”

The Progressive Governors Forum DG added: “In all my years of association with you, I never imagine that one day you will be so comfortable as to be indifferent to challenges that could threaten our national democratic development.”

Urging the APC National Chairman to allow room for divergent views while proffering solutions to problems, as against grandstanding, he said: “Grandstanding with reference to technicalities is the trade mark of Nigerian lawyers, with due apologies, which has produced the reality whereby the capacity of our legal and Judicial systems to deliver justice are weak.

“Once our reference point is some of those technical details, which rationalises where we are, the tendency is that all proposals will be reduced to conquest scenarios, which may only deepen and create new conflicts.”

He queried the refusal of Oshiomhole to convene meeting of organs of the party, especially the National Executive Committee (NEC) and National Caucus, stating his predecessor, John Odigie-Oyegun was removed for same infraction.