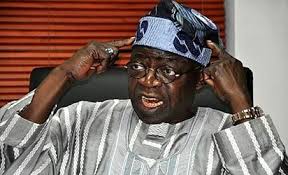 Policemen have invaded Airport Hotel, Ikeja, Lagos, where some political activists are holding a rally ahead of the March 9 governorship election.

Under the Orange Movement, the group converged on Oramiyan Hall in the hotel to strategise on how to stop Bola Tinubu, a national leader of the All Progressives Congress (APC), from having his way in the election.

Babajide Sanwo-Olu, candidate of the APC in the election, has the backing of Tinubu.

Some critics of the APC leader and members of the opposition Peoples Democratic Party (PDP) have alleged that a win for Sanwo-Olu translates into a fifth term for Tinubu, who served as governor between 1999 and 2007, and influenced the emergence of Babatunde Fashola, who governed the state between 2007 and 2015.

Tinubu also played a key role in the emergence of Akinwunmi Ambode, incumbent governor of Lagos.
The Orange Movement had adopted “O to Ge”, meaning “Enough is Enough”, a crusade which was used to uproot the political structure of Senate President Bukola Saraki.
A member of the movement told TheCable on Thursday that the police said the group did not seek permission from the appropriate quarters before organising the rally.