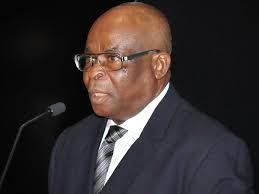 A minister in the administration of President Muhammadu Buhari on Friday escalated his long-running feud with the Chief Justice of Nigeria (CJN) Justice Walter Samuel Nkanu Onnoghen, instigating the arraignment of the (CJN), before the Code of Conduct Tribunal (CCT), according to multiple sources in the Presidency on Sunday.

” It was the minister’s thing. It was his idea. His way of working ahead to resolve his state’s issue in his group’s favor. He knows the case will get to Supreme Court. He is not in good terms with the CJN, a senior official familiar with the matter told Per Second News in Abuja.

As Per Second News first reported on Saturday, President Muhammadu Buhari was not in the know of the action to try the CJN.

” He is too abrasive, unreflective and brash, the highly placed official said about the minister whose name is withheld by this newspaper.

One of the officials stressed to Per Second News they have on various occasion tried to heal the minister’s rift with the CJN.

Per Second News exclusively gathered that there are clearly a lot picked up on the CJN by the security, most of which are Anti -Buhari. The CJN is said to have engineered an action in a South-South state against the president, according to a senior official in the Buhari administration.

“The CJN is alleged to have written the judgment on the APC case. The security picked up a couple of conversations by him boasting he was going to make sure the president didn’t come back. All of this is known to the people in government.”

Stressing further he disclosed that, ”while the hawks in government want him to go now some liberals advised he should be left alone and let the electorates decide. The hawks don’t want to take chances. The hawks are led by this minister from the South and a few people in the Presidency.”

” There is so much in the possession of the security which if thrown in the public space will embarrass the entire judiciary if not the nation, the highly placed official said.

Meanwhile, the Federal Government has sparked backlash within the past 48 hours over the crisis.

The probe of the CJN was met with anger, mockery and skepticism from Nigerians.

Chief Afe Babalola (SAN), in a statement of Sunday described the proposed trial of CJN Walter Onnoghen, at the Code of Conduct Tribunal over alleged failure to fully declare his assets as “denigration of the country’s Judiciary and Constitution.”

“For the sake of our democracy, this is a misconception that must not be allowed to fester.

“No country, no matter how well intentioned its political leaders are, can aspire to greatness if its judicial arm is denigrated and held in contempt.

“The charge against the Chief Justice of Nigeria, Justice Walter Onnoghen ought not to have been instituted at the Code of Conduct of Tribunal in view of the case of Nganjiwa v FRN (2017) LPELR 43391 wherein the Court of Appeal held that a judicial officer who has not been investigated by the National Judicial Council and sanctioned for misconduct cannot be arraigned in any criminal court in Nigeria, he said speaking with Premium Times.

A source in the Presidency on Saturday afternoon confirmed that the plot against the CJN may have been designed to embarrass the Presidency and create misunderstanding between the judiciary and the FG.

The source explained that the only impact such an action would generate at this time is distasteful.

It is not going to fly,” said a top government official.

Another official added that whatever may be the merits of the case being put against the CJN, it is not advisable at this time. So it is not about the rightness of the planned action.”

Asked whether the plot will go forward, the source said “what is certain right now is that this came as a shock to the Presidency and does not enjoy approval of any kind. You can figure out the rest.”