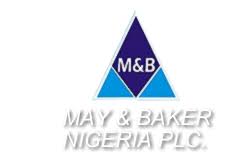 The company was not quite as able to weather Nigeria’s uncertainties in 2016 like a lot of other companies did, and the recession had a down turning effect on the company’s profit. It recorded an after tax loss rather than a profit. While this affected profitability ratios, it did not affect dividend payment to shareholders.

Available unaudited results show that the 2017 FY year should be a better year for the company in terms of profitability and for shareholders in terms of dividend.

Despite the loss recorded, the company still chose to pay shareholders a dividend. Shareholders received  DPS of 6 kobo per share, up from 5 kobo in the erstwhile year/

May & Baker recorded a profit margin of 4.1 per cent during the course of the year, as compared to 1.9 per cent in the prior year. This means that every N100 worth of turnover made a profit of N4.10, as compared to N1.90 in the prior year. For the review year, the company recorded an after tax loss of N41 million. The company recorded a profit margin because it recorded a pre tax profit during the course of the year. It was after it had paid taxes that it was left with a loss.

As per return on assets (ROA) and return on equity (ROE), the company had mixed results. Its ROA was better than that of the preceding year while its ROE was worse.  ROA for the year was 4.1 per cent, up from 1.7 per cent in the prior year. This means that every N100 worth of assets contributed N4.10 to the pretax profit. Meanwhile ROE was negative 1.4 per cent in 2016, down from 2.2 per cent in 2015. This means that every N100 worth of equity deployed contributed an after tax loss of N1.40 rather than a profit.

Earnings per employee improved to N28.38 million on the average, up from N22.94 million in 2015. This is indicative of employee productivity and company efficiency.

Not only did May & Baker have a lower capital adequacy in 2016 than it did in the prior year, the result also fell a little short of industry standards for the period under review.  At 54.9 percent, and lower than the 65.8 per cent result recorded in the prior year, the company’s result is a little low and suggests that its financial strength in the future is not as strong as it should be.

As per the liquidity position of the company, it is now better able to convert assets into needed funds more quickly than it did in the prior year, recording a current ratio of 1.38 times in 2016, higher than 1.03 times in the preceding year. This suggests efficiency of the company’s operating cycle and its ability to turn its products into cash.

May & Baker recorded a profit margin of 4.1 per cent during the course of the year, as compared to 1.9 per cent in the prior year. This means that every N100 worth of turnover made a profit of N4.10, as compared to N1.90 in the prior year. For the review year, the company recorded an after tax loss of N41 million. Despite this loss, it dipped into reserves to declare a dividend.  With a profit margin of 4.1 per cent, a retention ratio of negative 2.4, an asset turnover of 0.98 times and an asset to equity ratio of 2.86, the company had a sustainable rate of negative 27.6 per cent. This means that using only the resources it generated, the company had no capacity to grow at all during the course of the year. It however grew by as much as 11.9 per cent.

Even though the May and Baker sock price is quite low at N2.57 apiece (as at the October 26 2017 analysis date), our analysis shows that it is still overvalued even at that low price. First, nets assets per share is only N0.79, and this is less than half the size of the current market price. This is a clear indication of overvaluation. Secondly, the book value to market value ratio is much lower than one, another clear indication of overvaluation. While book value is N3.01 billion, the market value is a much higher N10.64 billion. It is obvious that the company is worth much less in reality than the price it is currently trading at.

We do not recommend a buy at this price.

May & Baker’s half year results for the 2017 year shows a little promise, in respect to profitability. Although the company did not manage to earn a higher revenue this period than it did in the last, it was however able to significantly grow its after tax profit level. Revenue for the period was N4.47 billion, lower than N32.3 billion before while profit after tax was N490 million, 63.3 percent better than the N300 million before.

If the company continues in this vein, it might have a better showing come year end 2017 than it did in 2016.

May & Baker was founded in 1944 as Nigeria’s first pharmaceutical company. It has its origin in England, the United Kingdom where in 1834, three chemists founded Grimwade, May & Pickett, a  firm for manufacturing chemicals for pharmaceutical products. In Nigeria the company started as May & Baker (West Africa) Limited and in 1976, changed to May & Baker Nigeria Limited

In 1979, following the indigenisation decree which required that foreign interests in companies operating in Nigeria be of a minority nature, May & Baker, United Kingdom relinquished 60 per cent of its equity holding in May & Baker Nigeria to Nigerians while retaining 40 per cent. The company’s name was changed to Embechem Nigeria Limited but this was dropped later and the name reverted to May & Baker Nigeria Limited.

The company began an aggressive expansion and diversification programme since 2005 which has culminated in the creation of new businesses and subsidiaries. In 2005, Biovaccines, a local vaccine production subsidiary was set up in partnership with the Federal Government of Nigeria. In 2006, the company constructed a multi-billion naira food processing factory, constructed a local plant for the production of anti-retroviral drugs in Nigeria while the construction of a World Health Organization Standard Pharmaceutical production facility was constructed and commissioned on June 27, 2011.

While we do not expressly recommend the May & Baker stock for a buy, investors might on the other hand want to take advantage of the fact that it is a low priced stock to buy into the company in the hopes of better profitability in the future.

*May & Baker’s 2017 half year unaudited results