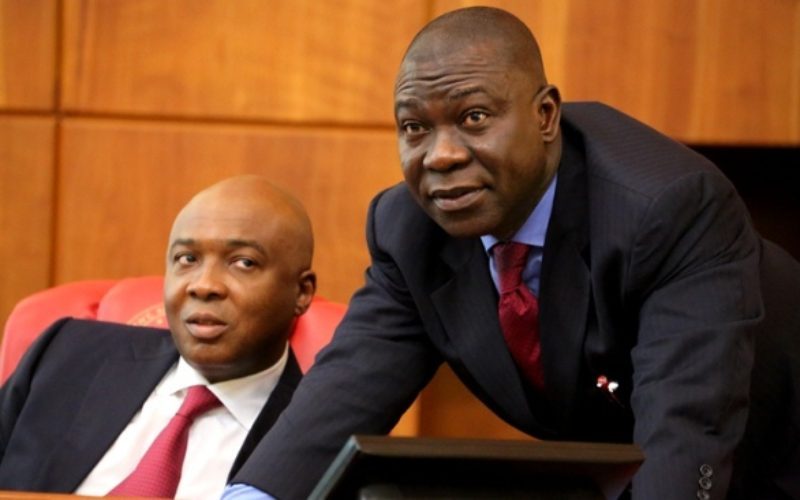 The Peoples Democratic Party (PDP) has raised alarm over an alleged plot by security operatives to arrest and detain the Senate President, Dr Bukola Saraki, and his deputy, Senator Ike Ekweremadu.

PDP National Publicity Secretary, Kola Ologbodiyan, made the allegation in a statement on Sunday saying the arrest was planned to come ahead of the reconvening of the National Assembly and to purportedly hold the Senate leaders back from the sitting and, thereafter, impeach them in their absence.

He accused the ruling All Progressives Congress (APC) of being behind the said arrest and detention of the Senate President and his deputy adding that part of the plot was to purportedly use security forces and some government agencies to clamp down on the family members of the Senate leaders.

The detention of the duo, he said, would enable “the APC senators,” who he said were in the minority, to produce two of their members as Senate President and Deputy Senate President on the excuse that Saraki and Ekweremadu failed to show up for proceedings in the Senate on Tuesday.

“The fresh plot to detain the two presiding officers is part of renewed design to keep them out of circulation, ahead of Senate resumption, so as to enable the APC senators, who are now in the minority, to throw up two of their members as Senate President and Deputy Senate President respectively on the excuse that Saraki and Ekweremadu failed to show up for proceedings in the Senate,” the National Publicity Secretary claimed.

“In all, the PDP cautions the APC and power mongers to know that Nigerians have seen through their intentions and will continue to firmly resist them by standing for democracy and the unity of our nation at all times,” he said.

He also alleged that the government was planning to use the EFCC to harass members of the families of the presiding officers of the Senate.

Ologbondiyan said, “The PDP notes that the new plot to cage Saraki and Ekweremadu in a devilish rehash of the Tuesday July 24, 2018 hostage-taking and invasion of their official residences by security agencies is coming after the August 7, 2018 failed attempt to use security forces to take control of the leadership of the Senate.

“Apart from the plot to arrest and detain Saraki and Ekweremadu, the PDP has also been made aware of plans to use the EFCC and security forces to clamp down on their family members, including their wives and siblings as well as close associates, all in the effort to weaken their resolve.

“Moreover, investigations by the PDP further confirm that the insistence of the APC-led Federal Government on the emergency reconvening of the National Assembly, ostensibly to consider INEC’s budget for the 2019 elections, is part of APC’s thicker plot to execute their premeditated ‘coup’ against the leadership of the Senate.”

Ologbondiyan added that the PDP was further informed that contrary to claims by the APC and the Presidency, INEC actually submitted the budget to the Presidency in February 2018, only for the Presidency to submit it to the National Assembly in July when the legislature was already going on recess; with a view to enmesh it in a needless controversy.

He called on the Acting President, Prof. Yemi Osinbajo, to stop acting as a saint, saying that Nigerians were aware that he was part and parcel of the actors behind the sordid developments playing out in the National Assembly.

Ologbondiyan called on Nigerians and the international community to note the alleged activities of the APC and the Buhari Presidency, which he said had continued to put the unity and stability of the nation and democracy under serious stress.