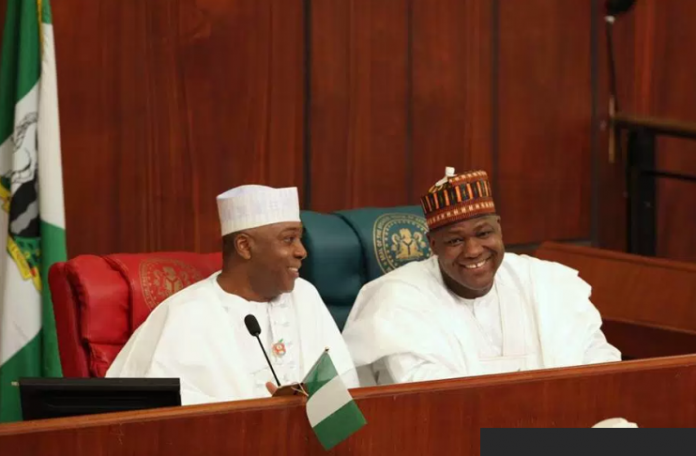 Senate President Bukola Saraki and the Speaker of the House of Representatives, Yakubu Dogara, have blamed the leadership of the All Progressives Congress (APC) for the barricade at the National Assembly.

Officers of the Department of State Services (DSS), stormed the Assembly complex, preventing lawmakers and staff from entry.

However, the leadership of the National Assembly have condemned the situation in a statement jointly signed by them.

Following the on-going invasion of the National Assembly complex by men of the Department of State Services (DSS) in which legislators and members of staff, including the Clerk of the National Assembly, Alhaji Mohammed Sani Omolori, who is the administrative head of the Federal legislature, were harassed and prevented from accessing their offices, Senate President, Dr. Abubakar Bukola Saraki and Speaker, House of Representatives, Rt. Hon. Yakubu Dogara has condemned the action of the security agents and described it as another attempt to subvert the nation’s democracy.

In a statement jointly signed by the two presiding officers of both Chambers of the National Assembly, Saraki and Dogara stated that the heavy presence of armed security men who unnecessarily militarized the legislative complex and harassed legislators and the workers in the complex could not be justified in a democracy.

The Senate President and Speaker further noted that it was a sad day for democracy as very early in the morning, they got reports backed by video and pictures, from members of staff of the National Assembly, their colleagues from both chambers and other individuals, about the heavy presence of the security personnel who insisted that nobody would enter the complex except certain Senators who were to be conveyed into the complex in a Coaster bus.

By 6.30 am, the reports started coming in and by 7 am, there were pictures and video online showing armed security men preventing Senators and Honourable members from coming into the Complex. Some of our colleagues then mobilized other members in both chambers from their respective abode so that they could pressurize the Security men from allowing them to gain entry.

Obviously, the public outcry from Nigerians and members of the international community against this illegality, this desecration of the sanctity of the legislature and this flagrant abuse of powers forced the government to relax the directives given to the security men as they later allowed the legislators to walk from the main gate into the foyer.

Still, the lawmakers were not allowed to drive in, in their vehicles and were denied access into the main building housing their offices.

It is not clear what the plan of the government is but information reaching us indicated that some Senators who are pro-executive arm are being camped somewhere here in Abuja and they are being compelled to sign an impeachment notice that would later be brought to the Assembly complex. The Senate Chamber will now be forced open to enable an illegal change of leadership takes place in the Senate.

It should be noted that the Senate formally adjourned on July 24, 2018, and it stands adjourned. To reconvene, there is a process which has to be followed. Also, it should be clear that these Senators who are camped somewhere know the procedure for changing the leadership of the Senate.

Both the leadership of the All Progressives Congress (APC) and the Presidency officials masterminding this illegality know that they do not have the numbers to lawfully carry out this action.

Therefore, we call on members of the international community to view this development as a coup against democracy. This is a throw-back to the inglorious days of military rule where dissent is not tolerated and freedom of association and other fundamental human rights are willfully and carelessly violated.

We urge Nigerians and the international community to condemn this illegal invasion of the National Assembly complex and the attempt to asphyxiate the legislature as undemocratic, uncivilized and irresponsible.

Let us use this opportunity to thank our colleagues in the Senate and House of Representatives who immediately mobilized to resist this coup against democracy. Their action will be recorded as one taken at a time when the soul of this country is being imperilled.

They have acted to avert the breakdown of constitutionalism and collapse of the rule of law. They have stood up to dictatorship and demonstrated that this country belongs to all of us.

We also thank members of the press, local and international, and all Nigerians whose support for the cause of democracy have sustained us this far.